My newest project... a scene editor

So, over the last few months I've been planning an interesting 2D/3D platform game with a new camera concept, it's one of those ideas that won't go away, so I started implementing it using Irrlicht (which is a very nice engine btw) but I got stuck pretty quick when I went looking for a scene editor...

There are various ways you can generate scenes for Irrlicht, you could use Blender for example but that's overkill for me, all I want is a way to load models, place them on a heightfield and then save it. There is of course IrrEdit.. the closed, Windows only editor. Unfortunately this doesn't run under Wine, and after chatting with Stefan Dösinger one of the Wine D3D guys, it turns out, it's not easy to fix.

After Googling various methods, I thought sod it, I'll write my own. So that's what I'm doing, it's a simple, unique scene editor written in C++/OGL and wxWidgets. It's unique in that it behaves unlike any other editor I know, hopefully I'll have a preview in the next couple of weeks. The general idea is that everything is done via a single 3D view and a tree view which displays the scene graph. So far I have terrain generation (either a plain grid, or via a heightmap), object selection/hovering, a lot of underlying infrastructure and the scene tree view. Next on my list is camera movement, this is going to be particularly cool, because selecting an object will cause the camera to move so the object is focused ready for you to manipulate it. More updates to follow ;) 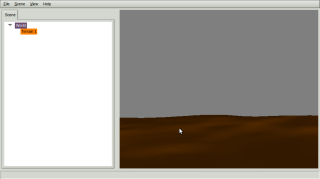